skip to main | skip to sidebar

Check his new works out!


I have seen a lot of zombie shorts. I’ve seen good ones, bad ones, and ones that look like they were pieced together from all of the dull parts of The Road. But never, have I ever, seen anything like For Menneskeheten (aka Saving the Human Race). [http://www.youtube.com/watch?v=qIg-I0p31JE]

Saving the Human Race, is a Norwegian zombie short film about a 14 year old boy with a robot side kick trying to get laid during the zombie apocalypse. It’s quirky, odd, and funny. Mathias is the bow-tie clad, last male survivor of the human race. He is adorable and the creator of an android companion who sports a Videodrome style belly and is presumably modeled after Torchwood’s Ianto Jones. Robot, Joansey, plays loyal partner, protector, and advice-giver to his maker and it is their relationship that really dominates the short.

If you have 15 minutes to look up Grumpy cat memes on the interwebs, then you have enough time to watch this. The zombies are mean, the dialogue is warm, and the concept is so completely out there that this is a must see.

It’s a story as old as time…a drifter comes to town, spots a pretty lady, and kills a bunch of people. Except in this case the killer is a psychokinetic tire. Yes, a tire.

Not only is the tire self-aware, so is the rest of the movie, which comes complete with its own audience. Lt. Chad is the bridge between the audience and the audience-audience and he cites that movies often offer no reason and that, “the film you are about to see today is an homage to the ‘no reason’ - that most powerful element of style.”

Is this an art house film wearing horror movie clothing? Is it a horror movie that breaks conventional horror movie rules? It doesn’t really matter; it is the only film with a serial killing tire and that alone makes it worth watching.

Review: Nazis at the Center of the Earth (DVD)

As a group, the Rigor Mortis staff can bicker and geek-slam like maniacal kittens fighting over a cricket in the house. Dread rolls his eyes until we fear seizure, Spinal Cord raises her razorblade-like eyebrow, and Colin clears his throat with enraged dignity. But a magical thing happened – we agreed on something, and that something is Nazis at the Center of the Earth. It spread among us like a virus and we all agreed this was an amazing moment in cinema.

Personally, I went into it thinking, “This sounds ridiculous and Jake Busey is in it, hit play!”

Jake Busey is Dr. Adrian Reistad and that right there tells you that suspension of disbelief isn’t all that important to the filmmakers. The film opens with nubile young scientists encountering foul play and going missing at a base in Antarctica. A search party is formed in accordance with Horror Movie Plot Convention #367.

I feel the need to point out that if you can’t pretend to be cold while you are in “Antarctica,” you should probably consider another career. A five dollar hooker can fake it better. Then again, maybe all that hot, young blood keeps them warm.

It is a truth universally acknowledged, that a horror movie in possession of a good gimmick, must be in want of a plot. However, this movie has a gimmick that really makes the need for a plot irrelevant. Another universal truth is that Nazis look awesome in snow. These aren’t Nazi zombies, but they would totally go out for a beer with the guys from Dead Snow.

And so, our heroes victims find themselves in a secret underground base, complete with an entirely different climate – all the better for the actors who can’t be bothered to pretend to be cold.

There is expected and unexpected gore and requisite evil Nazi scientist. The film’s genius becomes apparent once the decaying/regenerating Nazis arrive, lead by Dr. Josef Mengele, and the WTF moments build into a crescendo that takes suspension of disbelief by the throat and leaves it for dead. I forgot Jake Busey was even in the movie. That’s right, the what-the-fuckary was so great that a Busey was cast into shadow.

Beyond that are spoilers and I’m not going to ruin the fun for anyone - for a change the title actually under-promises and over-delivers.

Rent it today. If you live in Chicago rent it from Brainstorm Comics and tell them Colin Cthulhu sent you. 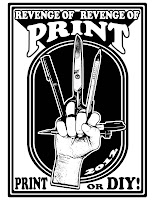 Because revenge is a dish best served as seconds.
Last year, after getting tired of hearing folks glibly forecasting the death of print, a number of people in the self-publishing/small press/zines/comics world teamed up to declare 2011 The Revenge Of Print. 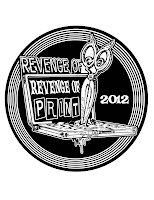 Organizers/sponsors included:
Stores: Atomic Books (Baltimore),  Quimby's (Chicago), Reading Frenzy (Portland), Xerography Debt, and Zine World, Razorcake, Maximum Rocknroll, Broken Pencil, and a number of zine libraries and distros around the world.
The challenge was issued - everyone who has ever made a zine, a comic, a mini-comic, handmade booklet, pamphlet or publication - or anyone who still was making one - or even anyone who as ever thought of making one - do it. Make at least one more publication in 2011. 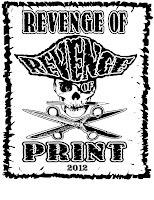 And the results are in. Quimby's and Atomic Books tallied up nearly 2000 titles published as part of, in response to, or in the spirit of Revenge of Print. How's that for revenge?
"Books are over." "Magazines are over." "Comix are over." "Zines are over." "Newspapers are over." Bah! Don't think so. We're over things being over.
And that includes revenge.
So Revenge of Print organizers and members are declaring 2012 The Revenge of Revenge of Print.
Once again we are encouraging/challenging/asking - everyone who ever made (or wants to make) a zine, a mini-comic, a journal, a chapbook, a magazine or any kind of self-made publication of any kind vow that in 2012, they'll make another issue/title/publication.
Yes, we're still making a point. And we're using the very tools credited with the demise of print to do so - the internet!

Join the Facebook group:
https://www.facebook.com/groups/revengeofprint/
And who is this "we" that's issued this challenge to self-publishers past, present, and future?
"We" are, to date,
Atomic Books - www.atomicbooks.com
Quimby's - www.quimbys.com
Reading Frenzy - www.readingfrenzy.com
Xerography Debt - www.xerographydebt.blogspot.com
and more TBA.
We'll be using the Facebook group as an organizing resource to provide addresses to publications where participants can send copies of their projects for review, and we'll also be listing addresses to real stores who will consign those very same titles so people can actually get copies the old fashioned way, by walking into a store.

Our list of participants has been growing rapidly. The Facebook group already has nearly 1,100 self-publishers. We're hoping you will team-up with us by helping to spread the word!
"Print lives if you want it."
Logos above are available for use and should be credited to Bojan.
Posted by Leeking Inc. at 1:37 PM No comments:

Sorry for the silence, we've been busy working on the new project. Here's a taste. 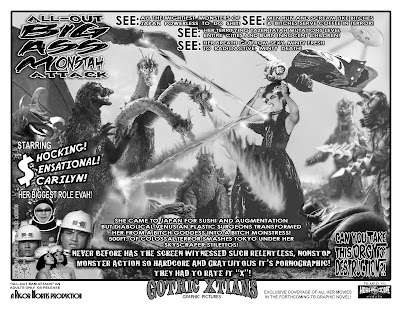 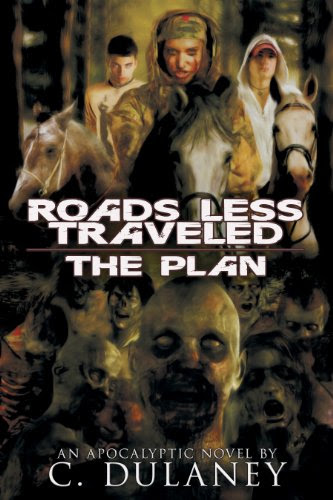 
ISBN: 9781934861998
This novel is a great example of the whole being greater than the sum of the parts. While my suspension of disbelief never fully engaged, my bullshit-o-meter remained relatively silent. I found myself engaged in the story and tore through the book in two sittings.
I could nitpick – too many 20-something characters, first-base sexual tension, omniscient characters – but that seems unfair because this is actually an entertaining zombie novel that takes some unexpected chances. It marriages, at once, brutality and common sense with a smidge of touchy-feely without venturing over to the land of pointless nihilism. And the dog lives.
The outbreak occurs and Ben, a college student in Pennsylvania, contacts Kasey, an online friend living in West Virginia. They had a plan for this and begin to enact it. As one would expect in a world now teeming with the living dead, nothing goes as planned. Instead of just Ben, Kasey, who is anti-social and dealing with unspecified anxiety, welcomes a group of strangers into her home. She lives in a remote farm house nestled against the Monongahela National Forest that is a survivalist’s dream home.
Conflict, of course, arrives with her visitors – internally and externally; dead and living. The characters are both stupid and too smart, but the mixture keeps this from tilting either way. Dulaney attempts to create complex characters and some are better realized than others. For comparison’s sake, Brian Keene often creates one-dimensional characters, but Colson Whitehead’s Mark Spitz was fully three-dimensional. Dulaney’s characters hover around the 2-2.5 mark. There was more character back story that was alluded to, but perhaps cut. I was left with a few questions. Or maybe she just isn’t done introducing us to her characters. I’m curious to see if they go fully 3-D with the next installment.
This may seem like an odd or disparaging comment, but this would also be good for a YA audience. I mean this in a complimentary way. The main character is a strong, self-sufficient young woman; someone who I think would resonate with either gender. The sex is implied behind closed doors. There is strong language, but nothing they haven’t heard before. There is violence, but it has repercussions. And no sparkly vampires.
Overall, rollicking bit of zombie lit with plenty of action, blood, and coffee. And yes, I am heartened by an apocalyptic world where coffee still exists.
Posted by Leeking Inc. at 5:11 AM No comments:

Why a Zine About Zombies?

Because sometimes thinking about a zombie apocalypse is the only relaxation in one's day.

If you are interested in the paper form of the zine, check it out at: leekinginc.com

Spooky Places on the Web